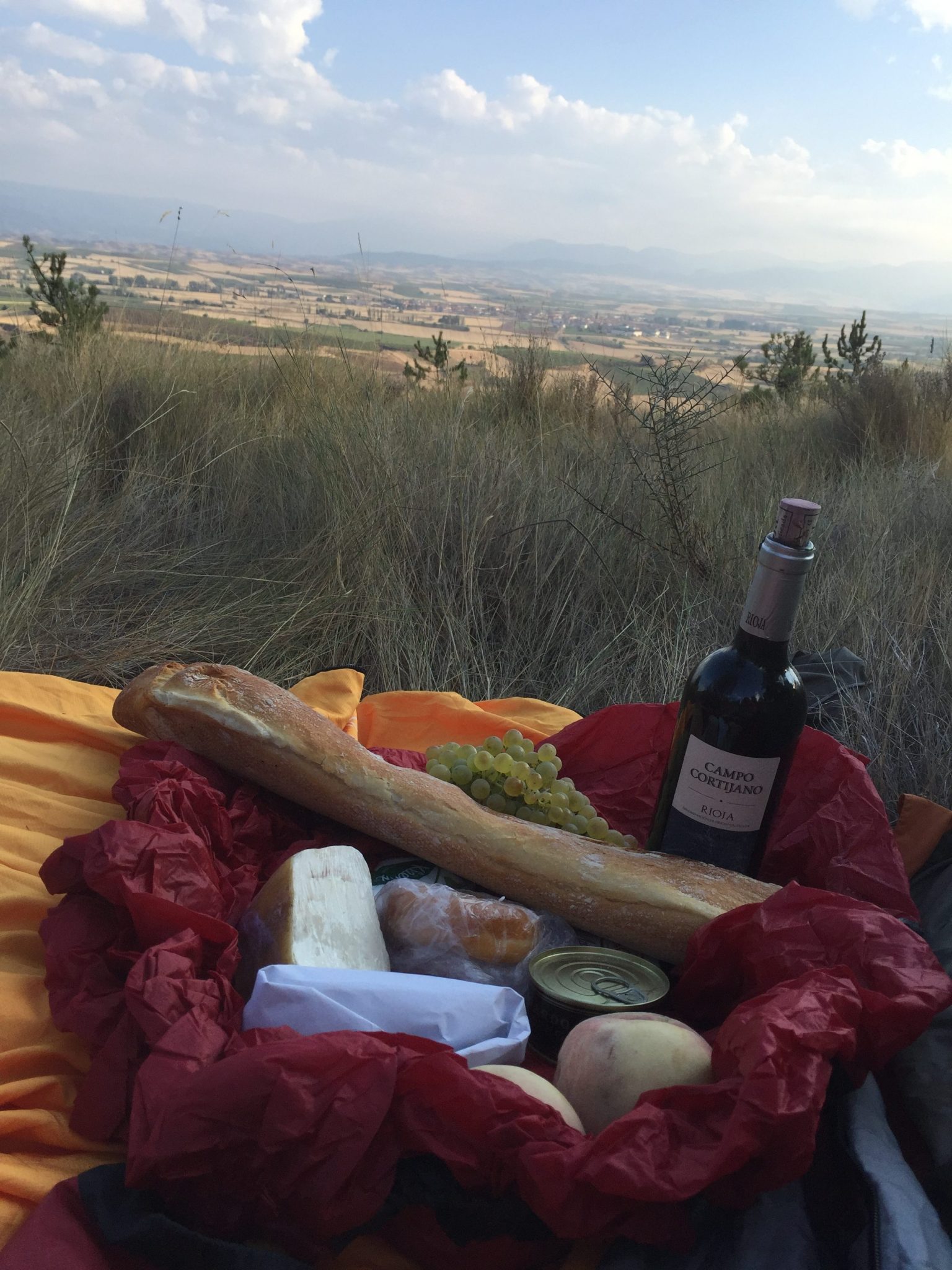 What a full day we’ve had! After a night of rain, we set out in a soft mist. Ever since Claus texted me with pictures of his spending the night out under the stars when we were apart, I’ve known that I had to have that experience, too. Unfortunately, the forecast was more rain so it didn’t look like tonight would be that night. It was a gentle pastel morning and the hours flew by as we continued talking and discovering and being astounded by how present God feels on the Camino. We kept our eyes open for messages the day and The Way had waiting for us. As we passed two circles in cement, I suggested that we use them in a ceremony-of-sorts. I learned this on a Vision Quest a few years ago. The idea is to choose two things in your life that appear to not be able to co-exist and, then, finding the third way from two seemingly opposing realities. He chose fear and love. I told him that he was to stand in one circle and feel the fear. Then stand in the second circle and feel the love. Then stand in both circles at once and allow the “third way” to arise that honors the reality of both without being limited by the belief that it is either one or the other.

There were two large stones already sitting in the middle of the circles. That was perfect. They could carry the energy of the “fear” and the “love.” Clause stepped into the first circle of “fear” and immediately, it caved in, the large stone fell in and Claus barely escaped the same fate. At that point, I realized we had intended to initiate one ceremony but that one was not the one the God had in mind. The Camino message was dump the fear and just make sure you don’t fall in after it. A few more miles down the road, I almost stepped on little snail. I stooped down and gently lifted her into the palm of my hand. Of course, she quickly retreated back into her shell. I carried her a few paces down the road and Claus asked me what drew me to pick her up. I didn’t know exactly but I said, I think because she is such a mirror of myself. I know that I get so easily spooked and in a split-second I can be hiding within my protective shell. But, I also see in this shell, that she can only move forward and live life when she exposes her soft vulnerable parts to possibly even be stepped on.

Claus suggested there may even be more to this message. As I opened up to really trust that God can and does speak to us through the dailyness of life, I recognized that I was the snail but I was also the hand. I am the carrier and the carried. The exposed and the protector. I am big and I am small. And, it’s okay to be both/and. I returned the little snail back to her little world and thanked her for being the still, small voice to me this afternoon. It was time for us to start looking for a place to stay for the evening. Despite the forecast, there was no rain in sight. So, we decided to take a chance and keep our eyes open for a place to camp out under the stars for the night. Claus spotted a little cluster of trees on top of a hill. The problem was…you had to cross a four-lane highway to get to the road leading up to it. Claus spotted a tube/tunnel that ran underneath the highway. He asked me if I were willing to go on an adventure to get to our spot. Despite over a hundred hours of talking between us, it is obvious he still doesn’t know me that well. I am not one to back down from a challenge or away from an adventure! We trekked down an embankment, forded a stream (that sounds so literary, doesn’t it,) hunkered down through a tunnel, hopped a rail, crossed a frontage road, created a path in a field, hiked up a hill, traversed the edges in reverse, robbed a grapevine, treaded soft waves of grass and landed at a plateau overlooking a painting of the Camino. We laid out our ponchos, sleeping bags, and a picnic worthy of a movie scene. The wind began to pick up and by the time the sun went down I was wearing two pair of socks, yoga pants, hiking pants, silk liner shirt, short sleeve wicked shirt, long sleeve hiking shirt, down jacket and Buff around my neck. It was all worth it when the sun completely set, the clouds parted, the stars appeared and I was caught up in a mixture of gratitude, awareness and wonder. We sat there in silence knowing words would only take away from this experience. I feel that same way in this moment as I attempt to write about it. But when you experience something you just want to share it with those you care about and I’m so enjoying sharing these experiences with you.