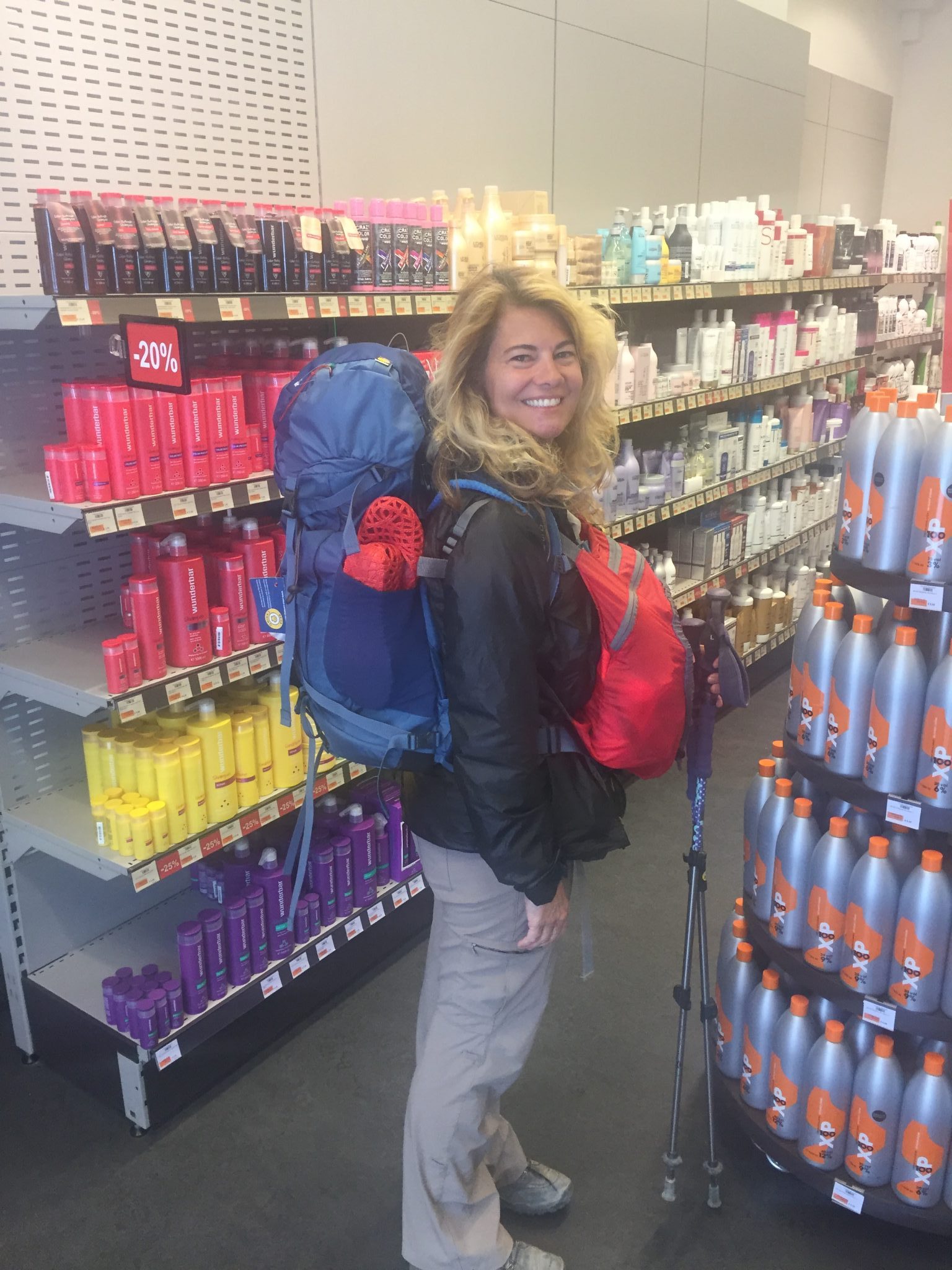 I finally made my way into Leon, albeit, I took a bus into the city because my feet hurt, it was raining, I needed to make up some time, the industrial section was ugly and I had had enough “Meseta-ing!” 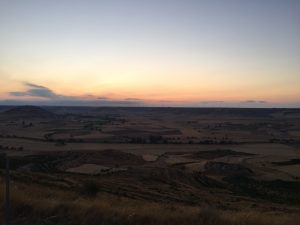 Originally, I thought I would spend an extra day in Leon to sightsee but after getting there I realized I live in a big city back home, I don’t enjoy shopping, I like tapas but I don’t like bar-hopping so I squeezed everything I wanted to experience in one day. 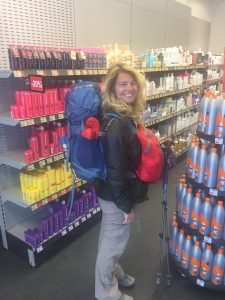 First stop, a hair salon store. I passed it on my way to my pension room and the thought occurred to me…hmmmm, it has been five weeks since I got my roots touched up and I have another three weeks before I get home, I wonder if they have my hair color tube? I texted my friend/hairstylist for the brand and color and, lo and behold, the Camino provided! Now, I just have to find a hairstylist between here and Santiago to apply it since I didn’t stay in Leon long enough to get that done. Please add that request to your prayer list. I’m serious. Women over forty, you know I mean it. 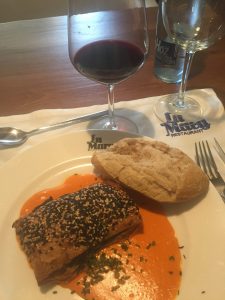 I have some friends of friends who are also walking the Camino but they are a few days ahead of me. The very morning I was heading for Leon, she posted a comment on my Instagram to strongly suggest I eat at a restaurant called “La Mary” when I  arrived in Leon. Perfect timing. I dropped off my backpack at 3:15, Googled the restaurant, discovered they would be closing for siesta at 4:00 and wouldn’t open for dinner until 9:00. (I would never make it living in Spain. I love the whole siesta idea and I could be down for that (literally) but I am often in bed by 9:00!) I ran out the door without even changing out of my sweaty, dirty hiking clothes. (And this was a somewhat fancy restaurant.) Thankfully, they seem to have grace for peregrinos. And, wow, what a meal! It was so good to eat a fresh mixed salad. I have missed that the most. Then, I had some kind of spinach-filled, pastry-wrapped, pumpkin-sauced entrée. Melt in your mouth good! I let the waiter choose my dessert so I don’t even know what it was but it was some kind of tarty, creamy, fruity, thingy. Oh, I also had a glass of red wine. It is so strange to drink in the middle of the day. No wonder they need a nap. I was very relaxed, to say the least. 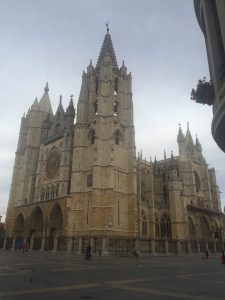 I drowsily made my way over to take a tour of the famous cathedral. (Another strongly suggested trip from my Instagram-friend-of-a-friend.:)) She was so right – it was stunningly beautiful. It wasn’t as opulent as the cathedral in Burgos but I liked it better. The stain-glassed windows alone could bring tears to your eyes.

The next item on my agenda was to get a massage. My right hip had started complaining a couple of days ago. My shins were still squealing. And, I had been carrying my backpack more so my shoulders were protesting. The hospitelero at my pension had given me a coupon for a free “water treatment” at a spa where I could get a massage. After using a combination of sign language, translation app, speaking louder and slower, and good, old-fashioned pantomime, I was led by the Spanish-only-speaking desk attendant to the “pool.”

She didn’t quite understand that I didn’t have a swimsuit and I didn’t feel comfortable skinny dipping so we compromised on a bra-and-panty dip. Hey, they needed to be laundered tonight, anyway. I’m so glad I did. It was as good as a massage before I even met the therapist. The first section was a regular jacuzzi-type swim with hot water and bubbles. The second section had really hard flowing water bearing down on my back and shoulders. The last section, was a place to lie flat and float while holding on to a bar. I have bought a few flotation therapy session Groupons at home and this was relaxing and meditative in a very similar way. 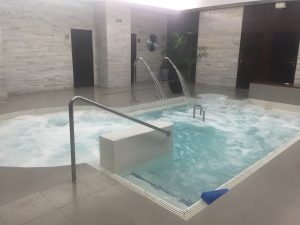 The massage therapist was incredible. He was part chiropractor, part Rolfer, part yoga instructor, part psychologist. He gave me a 90-minute session that was the most thorough massage I’ve ever received for half the price of one half the time back home. He even got a glove and massaged my jaw from the inside! He asked me if I clench my teeth at night. (I do. That is why I packed my mouth guard even though it weighed 2 ounces.) In his broken English, he said, “When you don’t bite during the day then you will bite at night in your sleep. You need to start biting, both to defend yourself and also to get what you need before someone else gets it first. Be an animal, sometimes. You will feel better.” 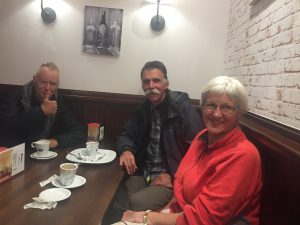 I slept like a baby and woke up early to write my blog before heading out of the city. It was raining so I found a café where I ran into some of the peregrinos I’ve been traveling with over the last few weeks. This is one of the funnest parts of the Camino – running into “family” in every city. 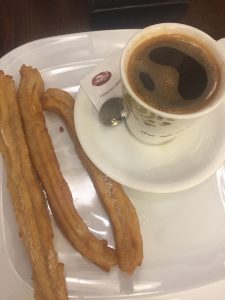 My son-in-law loves Churros so to feel closer to him I ordered a plate of them with my Café Americano. (That’s just the kind of sacrificial and loving mother-in-law I am.) I was also missing Claus so I ordered the giantist croissant I’ve ever seen (which is what he ate every morning) and put it in my backpack to snack on later in the day. Traveling alone gets lonely and even though its bad for you physically and emotionally there really is such a phenomenon as “comfort food!” 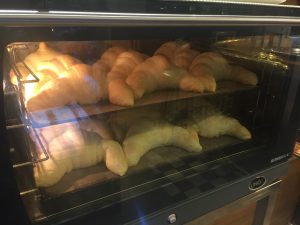